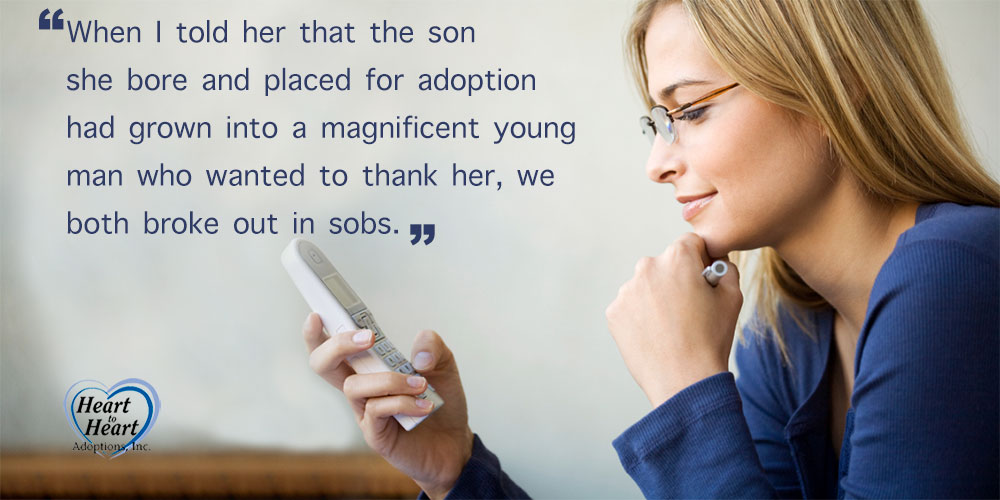 Ours was a closed adoption.  We were first foster parents for our little 5-week-old boy, knowing he may soon become adoptable.  His birth mother was placing him for adoption, but the government of Guam was intent on finding someone within his extended family to adopt him.  It was the culture.  But at 8 months of age, the parental rights were terminated and the adoption process began.  At age 2 he legally became ours.

Through the years we would talk with our son about looking for his birth mother.  And always, the answer was “not yet.”  Until he was 20.  Living in the Philippines, serving a mission for our church, the email came from him one week:  “I think it’s time to look for her.”  And so the search began.  We knew her name, but little else.  With advances in technology we thought it would be easy to find her.  And after a few months we did find a phone number.  Our son was still in the Philippines, so we waited another year for him to come home – all the time searching for another way to contact her.  Concerned that, with it being a closed adoption, she may not want to be found; or that even if she wants to be found – it would be a huge shock to get a phone call, we wanted to get an address or email address.  But when our son returned home, we hadn’t made any progress.  All we had was a name and a phone number – and we weren’t even sure about the number.  But sitting on his dresser was a slip of paper with the information we were able to find.  He knew that when he was ready, we would support him in finding his birth mother and making that call.

Two weeks after his return he was ready.  But he, also, was concerned about the shock this would be to her.  After much debate, he asked me, his mom, to call his birth mother and do two things for him:  He wanted me to thank her for him.  To thank her for life and for loving him enough to give him his best chance; and he wanted to know about his heritage.  Being a mixed race, he wanted more details.  So I called with those intentions – and my own agenda too.  You see, for 21 years we had prayed for her.  At different times during the year, my heart would swell with unuttered gratitude – words and feelings I wanted to share with her, but had no way to do so.  I prepared to deliver our son’s message to her followed with my own message of thanks.

When Joy answered the phone, I did my best to prepare her for the shock.  When I told her that the son she bore and placed for adoption had grown into a magnificent young man who wanted to thank her, we both broke out in sobs.  “You have him still?” she asked.  “Is he ok?  Has he been ok all these years?”  Our half hour international phone call was filled with very few words, but lots of emotion.  Gratitude on both ends spilled from us with tears and some words.  But mostly, in the silence, we could hear each other’s hearts.  At long last, we had found Joy.  That phone call was the start of having Joy in our lives forevermore.

Angels to Help Us