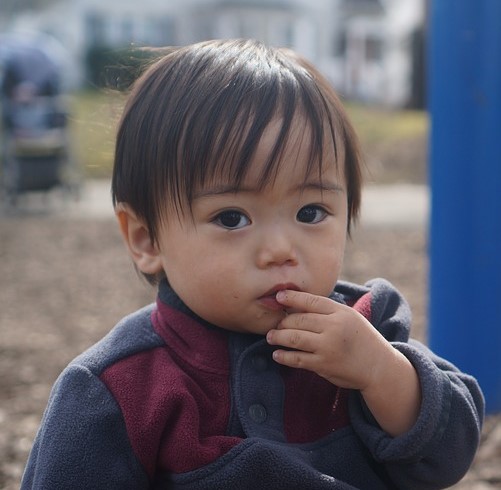 “Don’t you feel like you are always babysitting?” Rosemary asked as she more securely bundled up the child she gave birth to six months ago.  “I get so tired with just my own. I can’t imagine always having another one.”

The two of us were enjoying the first spring days at a local park. The 18-month-old I had not given birth to was sitting in the gravel under a set of monkey bars. He would pick up a handful of small rocks and try to throw them. They traveled as far as his boney knee then fell. With the type of limber movements only found in toddlers, he leaned over and licked the small rocks from his brown skin.

I was making yucky, yucky noises while digging pebbles from between his lips, when Rosemary address the issue of caring for an adopted child.

My companion, a prolific mother, can’t imagine bonding with children other than those she produced.

At some time during the adoption process most adoptive parents wonder about bonding. Whether this concerns starts during the home study or while defending your adoption choice to an aunt who is a strong believer in the apple not falling far from the tree and, “We certainly don’t know what kind of tree this child comes from.”

Those who easily produce children and have never considered adoption don’t understand that bonding is not about biology, but is a mental process.

The following steps will help strengthen your attachment with a baby, whether you gave birth to the child or whether you adopted the child.

Mostly don’t worry about doing everything right. Take time to get to know each other. You have a lifetime. This isn’t a babysitting job where the child leaves at five.