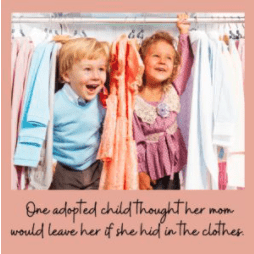 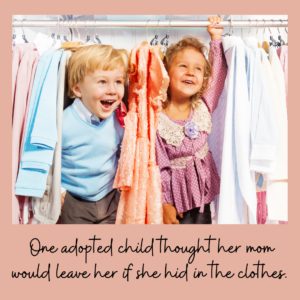 “What did your friends do when you were little that you weren’t willing to do?”

Innocent enough question drawn from a pile of “get-to-know-you” questions.

“When we were little kids, my friends used to hide in the clothes racks at Nordstrom,” one 17-year-old said. “I never did. I stayed right by my mom because I wondered if she would leave me as my “first mom” had. I was adopted.”

“You were adopted?” one of the student moderators asked suspiciously.

“That’s ridiculous,” originally we thought the speaker was commenting on adoptees looking different. Instead, he was referring back to the young girl’s fear of being left at a department store. “They adopted you on purpose. They weren’t going to leave you.”

The conversation was happening amongst twenty students gathered for the “getting to know you” opening session of a leadership conference. As they got to know each other, it was discovered six of the students had been adopted. Eventually, I asked all of the adopted teens at what age they had been adopted. All of them before six months old. All of them showed immense affection for their adoptive families. All of them came from the upper-middle class, and income bracket of most of the students since the qualifications for the conference normally drawn from a higher, more educated demographic.

“Did your adoptive parents ever say anything that made you feel that way?” another attendee asked the girl who refused to hide with her friends during shopping trips.

“No,” admitted the young woman. “I think it was what other kids said.” 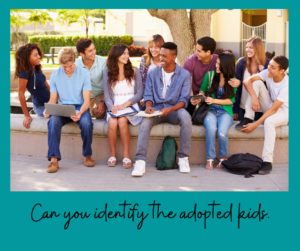 The adopted students remembered elementary years punctuated by statements such as the following:

Participants in the discussion also recalled things they had overheard which brought into question the value of an adopted child.

“And,” the original speaker said forcefully, “You couldn’t believe I was adopted because I’m, what, normal.”

The most compelling memory was a statement made recently in a civics class. The class was discussing the upcoming election and the candidates’ stance on abortion. Someone in the class commented that abortion and adoption are very different, but they have one thing in common. “They are both great ways to get rid of children.”

Recognize these real traumas come to adoptees in the best of circumstances. Most of these kids had learned to laugh it off. Just make sure you validate that these slights can hurt.

Adding To Your Family After Placing A Child For Adoption

Adoption of Ethiopian Boy Highlights Why LOVE Makes A Family