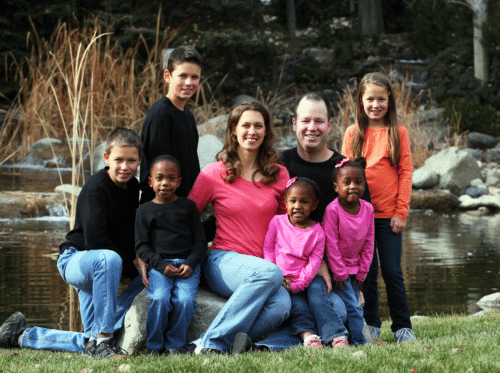 Our adoption journey has been an amazing one! We have three biological children, and three adopted children. We got about ten “no’s” before we were chosen by our son’s birth mother. Each time we had our profile shown to a birth mother and then found out she had chosen another family…well let’s just say it was an emotional roller coaster! But we knew that each “no” was leading us closer to a “yes”! After two months we were chosen, and we were thrilled! We got to meet Ty’s birth mother and spend a few days with her and her two children. What a neat experience that was! Tyrese was born on our oldest son’s birthday! We were present for his birth. It was a joyous time, but also a scary time. Tyrese wasn’t breathing very well, and he had to be taken by ambulance to another hospital. Tyrese ended up staying in the NICU for 3 weeks on all kinds of equipment to help him breathe. We were living out of state, so we “moved” into the hotel across for the hospital so we could be with Ty as much as possible. Finally, after many prayers, blessings, and a family fast, Ty got better and came home! He was on oxygen for a short time.

We always knew we wanted more than one adopted African American child. We figured we’d wait a year and then apply again, then again the year after that. However, when Tyrese was 3 months old, I felt impressed to look on the Heart to Heart available situations website, and saw that twin girls would be born in a few months! Immediately, I started to cry and I asked baby Ty through my tears, “are those your sisters? Are your sisters coming?” After calling Heart to Heart about this situation, we found out that the birth mother was planning to keep the first born twin. She really wanted to be a mother, and knew she could not parent two, but really wanted to parent one. We greatly hesitated because we wanted both girls, and we didn’t know if we could emotionally handle all of this. 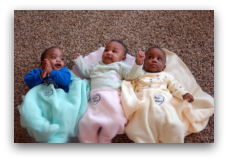 Even though we were filled with mixed feelings, doubt, and fear, we went ahead and submitted our profile. We were chosen immediately! Again, we had the privilege of spending a few days with the twins’ birth mother, and that was a wonderful experience! I was able to be there for the birth of the twins and that was such a blessing to witness. Later in the nursery, my husband and I went to see the twins. It was very difficult to see the daughter we wouldn’t be leaving the hospital with. Our daughter Tiffany, ended up staying in the hospital for a week in an incubator because she wasn’t gaining weight. Her birth mother and sister stayed a few days, and then went home. It was an emotional time saying goodbye and not knowing if we would ever have Tiffany’s twin sister.

We went on with our lives with our 4 month old and our newborn. We prayed for Tiffany’s birth mother and sister, that they were doing well, and that if it was God’s will, that we would be able to adopt Tiffany’s sister in the future. Three months after their birth, the twins’ birth mother called me and expressed how difficult her life was. We had talked in the very beginning with her that if parenting ever became too difficult, we would be more than happy to adopt the other twin. I tried to offer comfort to her as we talked about her difficulties. I didn’t hear anything for three more months. 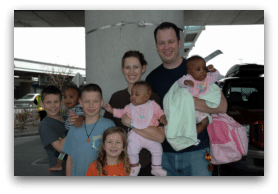 When Tiffany was six months old, we got a phone call one day. “She’s ready,” was all I heard when I picked up the phone, and immediately I knew it was Donna, and that we would be getting Tiffany’s sister! I began to cry and shake all at once and called out to my husband that we were getting our daughter! A few days later, Tiffany, Donna and I flew to the location where the birth mother was. It was a time of hugs and happiness seeing each other again. The birth mother and I loved watching Tiffany and Tameeka interact, smile, and play together. I can’t imagine the sorrow she must have felt. What a wonderful, courageous, and selfless person she is to have made the difficult decision- again- to make an adoption plan.