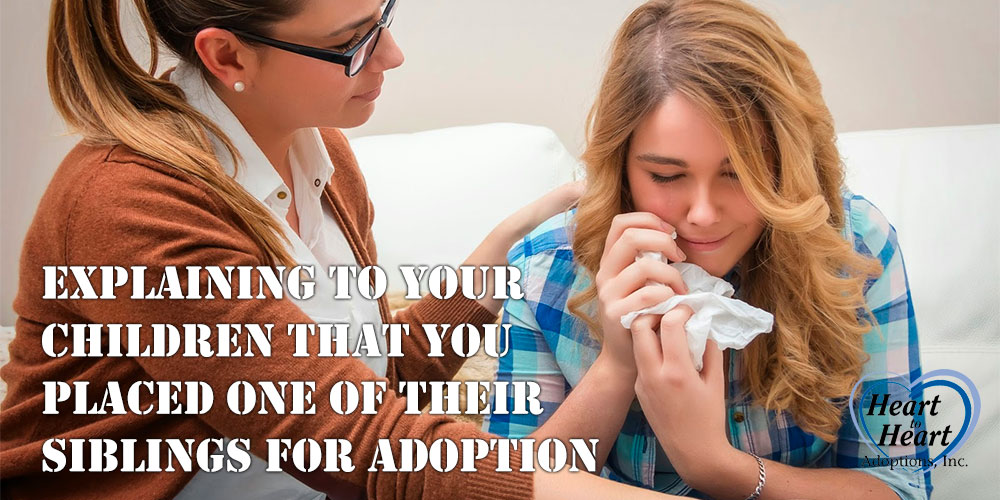 When I became pregnant with my birth son, it wasn’t until I was in the ninth week of pregnancy that I fully decided upon adoption. He was not my first child; in fact he was my fifth child. I had already gone through all the emotions involved in actually deciding to place my baby up for adoption, my challenge came in a different form and that was telling my other four children that I had chosen to relinquish their brother to adoption. At the time they were ages three, nine, twelve and fourteen. They knew I was pregnant, they knew that what was inside of my belly was a baby and they knew the baby inside my belly was their brother. I knew this was not going to be something I could handle alone.

The plans went into action. I collaborated with my children’s therapist whose name was Karen.  They loved her and they trusted her and I knew she would be able to help me. Karen and I decided to wait a few weeks and then we would schedule a therapy appointment that included me and all the children with Karen. I was not looking forward to telling the children. They enjoyed watching my belly grow, and they would put their hands on my growing belly and feel the baby moving and kicking.

I tried to prepare myself as best as I could. The day finally came and we walked into the room, sat down, and told the children that I had something very important to tell them. I couldn’t stop the tears. They came before my words could. I managed to somehow get the words out and tell them that we couldn’t keep the baby. I told them that I had picked out a different family for their brother, and they would have to prepare themselves to say goodbye.

The children looked stunned, confused, and a little bit like they didn’t know what I was talking about. Three of the children seem to understand after discussing the subject more, but the second to the oldest one had not stopped crying since the words came out of my mouth. She was devastated and I didn’t know how to comfort her. We left the therapy appointment that day sad. I expected that. Now my job was to help them process the emotions of the up and coming events.

Fast forward five years. I wanted to write this article because it has been five years since I relinquished my baby to adoption. My Birthson is five years old now and my other children are five years older as well. What I have noticed was that the effects of the adoption were lingering, and my children, although seemingly well-prepared, had to deal with the emotions of giving their brother up for adoption for years. It would break my heart every time they brought up the subject, and I knew I couldn’t change anything. I just had to let them grieve and process through their feelings. It took time but I can honestly say that my kids have accepted the situation. The most meaningful moment I’ve had in a long time came when my oldest daughter, now 18, and I were having a conversation about my Birth son. Even though I’ve told her a hundred times, I told her again that I was sorry. Sorry that I gave away her brother. She looked at me and the words that came out of her mouth caused me to cry on the spot. She said “Mom, I believe everything happens for reason, and I believe Tyris is with the family he is supposed to be with.” I knew in that moment that she had grown to accept the pain of the past, and she was right, things do happen for a reason and Tyrus fits so perfectly inside of his family.
Life always throws curve balls, and none of us are immune to it. My daughter’s words that day told me that life goes on, people heal, and there’s nothing we can’t get through as humans because we are strong.