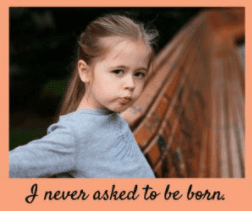 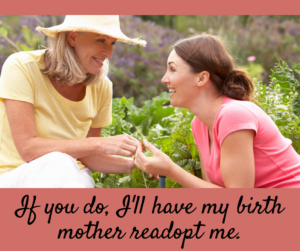 “You can’t tell anyone.” My 30-year-old daughter had called to confined in me. “Promise you won’t even tell dad until everything is over. Promise?”

“I promise,” I said for the third time.

“If you do,” my adult daughter threatened. “I’ll have Cindy (her birth mother) adopt me.”

“I will send her an itemized statement of expenses incurred,” I replied. I could hear the woman I’d raised from infancy smile on the other end.

This was the kind of chitchat which had developed since she was out of high school. NOT so much while in high school

Her comment about having her birth mother adopt her and my reply was not a conversation we would have had when she was eight years old.

When she was eight years old, I might have been threatened by her suggesting she would go live with her birth mother.

She might have been insulted when I mentioned how much raising children costs. In fact, she might have said something like, “Well, I’m sorry I cost money,” or “No one asked you to adopt me.” 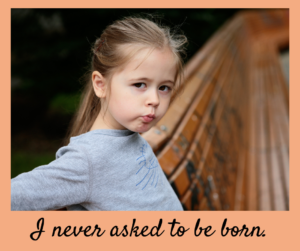 However, let’s be honest, I’ve heard children tell their biological parents, “I never asked to be born.”

Adoption does add different components to your relationship. Some of them are good. Some are not so good. But that’s life. 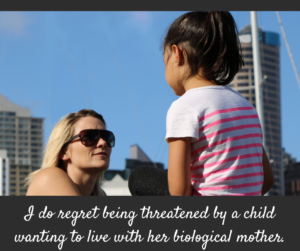 I do regret ever being threatened by a child wanting to go live with a biological mother. Of course, children want to connect with biology.

And now, the references and jokes between my daughter and myself about adoption are so normal, neither one of us has an emotional reaction. Instead, the witticisms bond us more.

Tags: adopt, adoptee, adoption, adoptive family, adoptive mom, birth mom, birth mother, birthmom, birthmother, family, give away my baby, give my baby away, give up my baby