Birth Mother - Missing Your Own
High Expectations Is Not Failure! 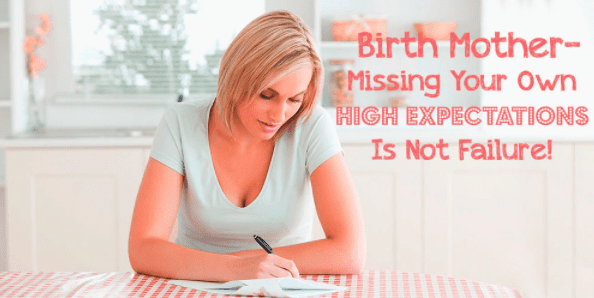 Hello! My name is Rebekah. I am 39 years old and I am a birth mother to a wonderful five year old little boy named Tyrus. Before Tyrus was born I thought a lot about what I wanted my relationship to look like with him. I knew I was not going to be the one raising him. I knew that I had chosen a family for him that lived states away. But, I still had some ideas about how I could stay in touch and be part of his life from a distance.

One thing that was a really big deal for me was that I wanted to find a bunch of the same matching stationary. I was going to write Tyrus a letter every month of his life until he turned one year old. After he turned a year I would write him a letter every six months and then after that I would just make sure I wrote once a year or more depending on what I could think to write to him. I knew that he couldn’t read, but I had this dream of his mom and dad handing him all these cute little matching envelopes some day with my letters in them wrapped up in a ribbon from his birth mom. How special would that be for him or maybe for his future wife and kids to have a little history on his life?

As the first year of his life passed by, and then the second and third and now fifth, I realized that my idea of what I wanted my relationship to look like with my birth son was not going according to plan. I had not written him as many letters as I wanted to, and I wasn’t making phone calls to him very often. I started to feel like a bit of a failure in the relationship department with my birth son. The guilt set in.

Tyrus’s mother and I have a pretty good relationship. Ironically, we have the same name, “Rebekah,” so I will refer to her as my birth son’s mom. A couple weeks ago we were having a conversation and I was telling her how I was just really feeling like a failure when it came to my relationship with Tyrus. I wanted to do more for him and I hoped it wasn’t too late. Tyrus’ mother is a beautiful lady and someone I have great respect for. What she said to me next would change the way I looked at adoption and my role in nurturing my relationship with my birth son. Her words to me were:

“Rebekah, my love for you is so great. God doesn’t hold your failures against you; you shouldn’t either.”

“It’s never too late to invest in relationships.”

“Tyrus adores you and all the things that you do for him. He’s never once talked about the things you don’t do.”

It was like a light went on in my head. She was right. I was the one putting all these expectations on myself. Tyrus enjoyed the letters I did send and had no idea about the letters I didn’t send. The few birthday presents and Christmas presents I’ve sent him he still speaks about and plays with. But, he never speaks about things I didn’t do for him. It’s still hard for me to let go of the guilt. I think somewhere in my heart there is this responsibility I feel because I did birth Tyrus and naturally as a mother you want to do more and more. I had to come to terms with the fact that I did place him for adoption. I did trust Rebekah and Ben to raise him and give him all the physical and emotional love that he needs…and you know what….they are!!

I’m so blessed to have the relationship with my son’s mother that I do. It has truly been a gift. Going forward I will make every effort I can to have a relationship with my son and try and let the guilt of the situation settle down and give it to God. Adoption requires a lot of trust and I’m learning every day what that looks like for me.

Adding To Your Family After Placing A Child For Adoption 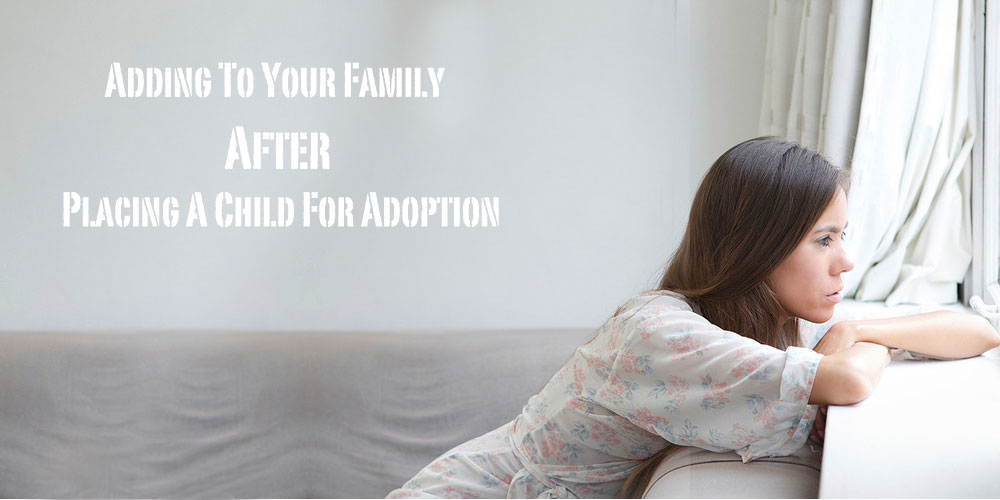 Hello! My name is Rebekah I am 39 years old and I am a birth mom to a sweet five year old little boy. I also have seven other children. Four of them I gave birth to and my three newest children are my wonderful step children. I have a very large blended family with kids spanning from ages five all the way up to 18.

Five years ago I made the very hard but responsible choice to give my fifth baby up for adoption, leaving me with just the four children I had chose to parent. Going through the adoption process left me in a whirlwind of emotions as a mom. On one hand I felt like I made the best choice I could for my newborn because instead of living a life in daycare and full of custody disputes I had given him a chance at wholeness. On the other hand I didn’t know where that left me as a mom. What If I got remarried? What if my new husband wanted to have more kids? Did I deserve to have more kids? After all I just gave one away right?

I chose not to date for a period of time after I had my birth son. I felt I needed time to heal and process all the events of the last nine months. For about two years I just spent time with my kids and allowed my heart to settle. That’s when I met my husband. I didn’t expect to meet someone so soon but it happened and he fit so well into my life that I fell in love with him.

We had such a special relationship. I loved him so much but I was having a very difficult time with the fact that he had three kids and they were very young. There was a battle going on in my head. I didn’t know if I was worthy or even allowed to have more kids. Wasn’t there some kind of written rule that after placing a child for adoption you shouldn’t have more? I was so confused and scared. There was no rule book or instruction book on this subject. How was I going to figure this out? I didn’t want to lose him…he was my answer to prayer.

We dated for several months and our kids loved each other and our our love grew as well. The more time we spent together the more I started to become more comfortable with the growing feeling that I was about to be a new mom to three more kids, but I kept asking myself “Is this ok?…Am I allowed to be doing this?”

I think every birth mom will face the situation I was in. I am so glad that during this time I had a good support team to help me through this difficult emotional challenge I had in front of me. In my mind I just didn’t feel worthy to be parenting any more kids since I chose not to parent my son. What I discovered after much prayer and council was that I was worthy. I was capable and I was allowed to have more kids. I discovered that there are moments in our lives that we have to make hard decisions, but that those moments do not define our future.

Today I am happily married to a wonderful man. I do have eight kids….seven I parent….one I do not…but that is ok because I am just in another “moment” in my life. Things change, people grow, life evolves.
Thanks so much for reading.
Rebekah Bancroft-Birthmom 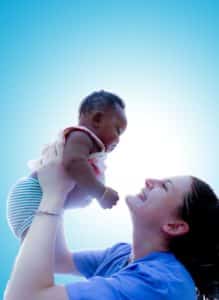 would pick me.” said one woman as she discussed her desire to adopt. “I’m a single mom with a teenage daughter.”

She had a point. Many birth mothers focus on giving their child a traditional family. However, there are so many unique circumstances with birth mothers and adoptive families. One case worker encouraged the woman to follow her heart and complete a home study. What did she have to lose?

There is the old adage, “There’s a lid for every pot.” This suggests that whatever you are like, whatever your perceived shortcomings, there is someone made for you.

We can’t and don’t promise a match for every potential family. We can say, however, that our single mother completed her home study in late October. In November, she was contacted about an expectant mother who was considering adoption i. The two families spent Christmas together and the baby was born the end of January.

The single mom and the birth mother have a unique bond. They both love the same son.

Recently someone sent us a message asking what a reasonable timeline on adoption was.

We had no answer.

Times have changed so rapidly in 2020. We can’t even guess. The situation for some adoptive families has changed. We are comforting them as they realize right now is not the perfect time for them to adopt. Birth mothers are finding this time of Covid-19 especially challenging. We don’t want expectant mothers to feel overwhelmed right now and make a decision they will regret once this pandemic has passed.

Birth Mothers We Hear You

We recognized the unique challenges presented to you right now. At the best of times, giving birth is full of unknowns. With this global pandemic, there are even more unknowns. We love you. We will support you.

We want you to know that we will present you with a multitude of options for your baby. This may include couples without children, couples with children, and single parents.  These families are in numerous locations.

We want perspective families to know that you must be prepared for a variety of situations. Some birth mothers will want close contact with their child and would enjoy being invited to family events. Other birth mothers will only want updates.